You press a light switch and the light comes on. What could be simpler than that.

But notice something. As the light comes on, you probably have a feeling that, somehow, you caused that to happen. This experience of ‘being the cause of something that happens’ is called the ‘sense of agency’, and it’s central to how we think about voluntary actions. When I make a voluntary action, like turning on the light, I usually feel agency over the outcome – as compared to if the light came on by itself, or if someone grabbed my hand and forced me to press the switch. Understanding the neural and cognitive mechanisms shaping our sense-of-agency is therefore a key challenge for the neuroscience of volition.

To study something, it helps to be able to measure it. But how can something as ephemeral as a sense-of-agency be measured? For nearly 20 years, researchers have relied on an indirect behavioural measure called ‘intentional binding’. The intentional binding effect was first revealed in a landmark study by Patrick Haggard, Sam Clark, and Jeri Kalogeras at University College London (see Figure 1). They paired a simple action (a button press) with an outcome (an auditory tone) and found that the perceived duration between the action and the outcome was reduced when people experienced a sense-of-agency over the outcome. That is, when the button press is voluntary (as compared to the experimenter moving the participant’s finger onto the button, for example), the two events are perceived as closer together in time than they actually are. This is the intentional binding effect. As the name suggests, it is typically interpreted as reflecting some kind of brain-based ‘binding’ between a conscious intention (to do something) and the outcome of the resulting action.

Following this original study, a torrent of research has used the intentional binding effect to indirectly measure the sense-of-agency in all sorts of ways, both in healthy volunteers and in a range of clinical conditions including schizophrenia, where experiences of volition can be radically disturbed. However, despite all this research, a key question has remained unanswered. How do we know that intentional binding is specifically about intentions? If it isn’t, then all the claims linking it to sense-of-agency rest on shaky ground. 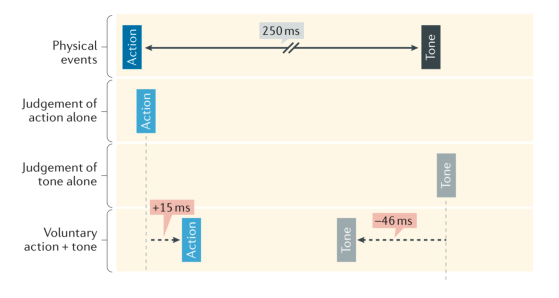 Figure 1. Intentional binding. When a voluntary action is paired with an outcome (a tone), the perceived time between the action and the outcome is compressed. This subjective compression of duration is taken to reflect a sense of agency over the outcome, which in turn is suggested to result from a perceptual binding of the intention (to make the voluntary action) with the outcome. In most interpretations of intentional binding, intentions are assumed to be necessary. Our new study challenges this assumption. Image from Haggard (2017).

This is the idea we set out to test in a study led by Keisuke Suzuki and Warrick Roseboom, which has just been published in Psychological Science. Our main innovation was to develop virtual and augmented reality (VR/AR) setups that allowed us to compare action-outcome situations both with and without intentions, but closely matched in all other ways. A schematic of our setup is shown in Figure 2.

Figure 2. Intentional binding in VR/AR. Left. volunteers sit at a table, wearing a head-mounted display (HMD). Hand position and configuration are tracked via motion tracking. Right. Volunteers see a virtual hand. In an ‘active’ condition they press a virtual button and receive tactile feedback via a stimulator attached to their (real) finger. In other conditions the button presses itself, or the hand moves by itself to press the button. An auditory tone follows the button press in all conditions, and volunteers judge the duration between the button press and the tone.

In this setup, volunteers sat at a table with their hand in front of them, resting on the table. They wore a head-mounted display (HMD) through which they could see a virtual table, a virtual hand, and a virtual button. We used motion tracking to map the position and configuration of their real hand onto the virtual hand. In a first ‘active’ condition, they pressed the button with their virtual hand, moving congruently with their real hand movement. In a second ‘no-hand’ condition, the button pressed itself – no hand movements were made or seen. In the all-important third condition, the volunteer saw the hand move and press the button, but they did not actually move their hand. We called this the ‘fake’ condition. Following each button press, in all the conditions, an auditory tone sounded after some amount of time. As in all intentional binding experiments, volunteers had to estimate the time between the button press and the tone.

This arrangement allowed us to closely match intentional and non-intentional button presses, comparing each to the no-hand condition where the button just pressed itself. Critically, in the fake condition, even though the volunteer did not make a hand movement, they still saw that hand moving and they still received the tactile feedback of the button being pressed. This means that, when compared to the active condition, the fake condition lacked only the conscious intention to move (as well as the direct proprioceptive feedback of the limb moving; we couldn’t do anything about that).

We conducted two follow-up experiments to verify our conclusions. In the first, we checked that people felt a stronger sense-of-agency over the button press and tone combination in the active condition than in the fake condition (when they did not move their hand). They did. In the second follow-up, we repeated the comparison between active and fake conditions but using augmented reality rather than virtual reality, just to check that nothing funny was going on because of our VR setup. The results were the same. Nothing funny was going on.

The most important implication of our study is that the mere presence of intentional binding effects cannot be used to infer a specific influence of intentions or a sense of agency, not without controlling for other relevant sources of information (visual and tactile feedback, for example).

Our data instead support the idea that intentional binding is a specific example of a more general process of causal binding across time and space. This kind of process is at the heart of Bayesian ‘cue combination’ schemes, in which estimates about the timing (or some other property) of an event is derived from a weighted average of all relevant sources of information, where the weighting is done by the estimated reliability of each information source. Bayesian cue-combination schemes are, in turn, well aligned with the idea that perception is a form of predictive processing, where top-down perceptual predictions are constrained by bottom-up sensory prediction errors. So when you next experience a feeling-of-agency over something, this can be thought of a kind of perceptual inference just like any other.

Think about all this next time you turn on a light.

This research was supported by the Dr Mortimer and Theresa Sackler Foundation, the European Union Future and Emerging Technologies Proactive grant TIMESTORM: Mind and Time: Investigation of the Temporal Traits of Human-Machine Convergence, and the Canadian Institute for Advanced Research (CIFAR) Azrieli Programme on Brain, Mind, and Consciousness.

One thought on “Intentional binding without intentional action: A new take on an old idea”