The human brain, it is often said, is the most complex object in the known universe. Counting all the connections among its roughly 90 billion neurons, at the rate of one each second, would take about 3 million years – and just counting these connections says nothing about their intricate patterns of connectivity. A new study, published this week in Proceedings of the National Academy of Sciences USA, shows that mapping out these patterns is likely to be much more difficult than previously thought — but also shows what we need to do, to succeed.

Characterizing the detailed point-to-point connectivity of the brain is increasingly recognized as a key objective for neuroscience. Many even think that without knowing the ‘connectome’ – the brain’s wiring diagram – we will never understand how its electrochemical alchemy gives rise to our thoughts, actions, perceptions, beliefs, and ultimately to our consciousness. There is a good precedent for thinking along these lines. Biology has been galvanized by sequencing of the genome (of humans and of other species), and genetic medicine is gathering pace as whole-genome sequencing becomes fast and cheap enough to be available to the many, not just the few. Big-science big-money projects like the Human Genome Project were critical to these developments. Similar efforts in brain science – like the Human Connectome Project in the US and the Human Brain Project in Europe – are now receiving vast amounts of funding (though not without criticism, especially in the European case) (see also here). The hope is that the genetic revolution can be replicated in neuroscience, delivering step changes in our understanding of the brain and in our ability to treat neurological and psychiatric disorders.

Mapping the networks of the human brain relies on non-invasive neuroimaging methods that can be applied without risk to living people. These methods almost exclusively depend on ‘diffusion magnetic resonance imaging (dMRI) tractography’. This technology measures, for each location (or ‘voxel’) in the brain, the direction in which water is best able to diffuse. Taking advantage of the fact that water diffuses more easily along the fibre bundles connecting different brain regions, than across them, dMRI tractography has been able to generate accurate, informative, and surprisingly beautiful pictures of the major superhighways in the brain.

But identifying these neuronal superhighways is only a step towards the connectome. Think of a road atlas: knowing only about motorways may tell you how cities are connected, but its not going to tell you how to get from one particular house to another. The assumption in neuroscience has been that as brain scanning improves in resolution and as tracking algorithms gain sophistication, dMRI tractography will be able to reveal the point-to-point long-range anatomical connectivity needed to construct the full connectome.

In a study published this week we challenge this assumption, showing that basic features of brain anatomy pose severe obstacles to measuring cortical connectivity using dMRI. The study, a collaboration between the University of Sussex in the UK and the National Institutes of Health (NIH) in the US, applied dMRI tractography to ultra-high resolution dMRI data obtained from extensive scanning of the macaque monkey brain – data of much higher quality than can be presently obtained from human studies. Our analysis, led by Profs. Frank Ye and David Leopold of NIH and Ph.D student Colin Reveley of Sussex, took a large number of starting points (‘seed voxels’) in the brain, and investigated which other parts of the brain could be reached using dMRI tractography.

The result: roughly half of the brain could not be reached, meaning that even our best methods for mapping the connectome aren’t up to the job. What’s more, by looking carefully at the actual brain tissue where tractography failed, we were able to figure out why. Lying just beneath many of the deep valleys in the brain (the ‘sulci’ – but in some other places too), are dense weaves of neuronal fibres (‘white matter’) running largely parallel to the cortical surface. The existence of these ‘superficial white matter fibre systems’, as we call them, prevents the tractography algorithms from detecting where small tributaries leave the main neuronal superhighways, cross into the cortical grey matter, and reach their destinations. Back to the roads: imagine that small minor roads occasionally leave the main motorways, which are flanked by other major roads busy with heavy traffic. If we tried to construct a detailed road atlas by measuring the flow of vehicles, we might well miss these small but critical branching points. 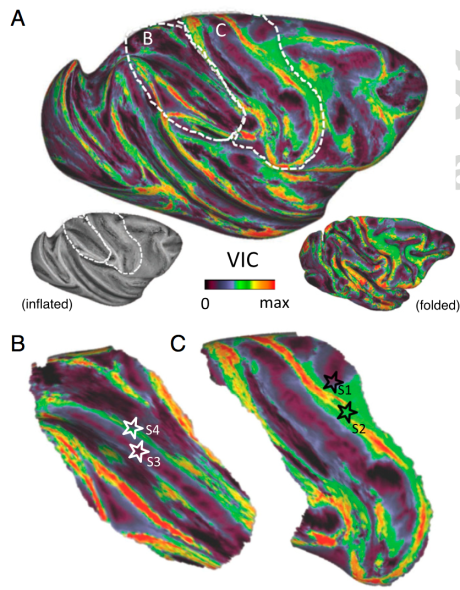 This image shows, on a colour scale, the ‘reachability’ of different parts of the brain by diffusion tractography.

Identifying the connectome remains a central objective for neuroscience, and non-invasive brain imaging – especially dMRI – is a powerful technology that is improving all the time. But a comprehensive and accurate map of brain connectivity is going to require more than simply ramping up scanning resolution and computational oomph, a message that mega-budget neuroscience might usefully heed. This is not bad news for brain research. Solving a problem always requires fully understanding what the problem is, and our findings open new opportunities and objectives for studies of brain connectivity. Still, it goes to show that the most complex object in the universe is not quite ready to give up all its secrets.

*David A. Leopold is the corresponding author.