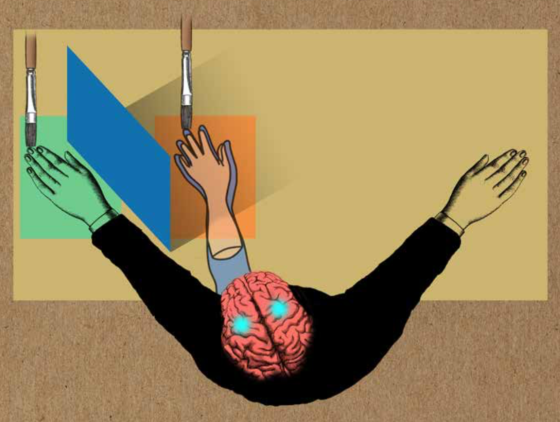 This is a Guest Blog written by Peter Lush, postdoctoral research at the Sackler Centre for Consciousness Science, and lead author on this new study.  It’s all about our new preprint.

A key challenge for psychological research is how to measure subjective experience. One domain in which this is particularly relevant is for experiences of ‘embodiment’. These experiences show widespread individual variation and can be surprisingly easy to manipulate. The rubber hand illusion, for example, is a famous effect in which a simple procedure generates experiences of ownership over a fake hand. Experience of the illusion can be measured either directly, through subjective reports of illusion experience, or indirectly, by changes in the felt position of the participant’s own hand. Scientists consider these measures to provide insight into the processes by which conscious experiences of embodiment come about.

However, such interpretations overlook the role of trait (i.e., stable individual) differences in the ability to generate experience to meet expectancies, which we call ‘phenomenological control’. If measures of the rubber hand illusion reflect the active generation of expected experience, then existing accounts of this and related effects will be incomplete or incorrect. Our new preprint, on PsyArXiv, reports the results of three large scale studies (more than 1000 participants in total) investigating the relationship between the ability to change experience to fit situational demands (phenomenological control) and established measures of embodiment. These results have implications not only for interpretation of embodiment measures, but also for any research employing measures taken to reflect subjective experience.

Here are the theoretical motivations:

Note that this proposal differs from common understanding of demand characteristics and experimenter effects, which are generally considered to lead to merely behavioural effects (e.g., social compliance). Subjects engaging in phenomenological control will report genuine experiences.

Hypnosis researchers employ standardised scales to measure response to imaginative suggestion within a hypnotic context. A high score on a hypnotisability scale shows that a participant has the ability to generate and control their phenomenology to meet the expectancies communicated by the ‘hypnotist’ through direct suggestion. Here we employed our Sussex Waterloo Scale of Hypnotisability (SWASH), which consists of ten imaginative suggestions for particular experiences (for example, the touch of a mosquito, a sweet or sour taste, hearing music, and involuntary movement). The most parsimonious theories of hypnotic responding argue that response to hypnotic suggestion involves a voluntary mental or physical act which is experienced as involuntary (e.g., Hilgard. 1977; Spanos, 1986; Dienes & Perner, 2007). For example, a successful response to a suggestion that one’s arm will move of its own accord involves generating the inaccurate phenomenology that a voluntary action is involuntary. Similarly, a suggested experience of hearing music would involve an intentional act of imagination which, again, is experienced as unintentional.

We tested our predictions on three embodiment measures. These effects were chosen because they involve striking changes in experience and therefore have much surface similarity with imaginative suggestion effects. 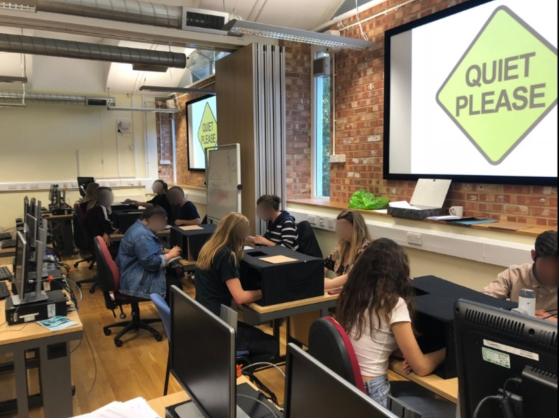 Figure 1. A large-scale rubber hand illusion study. We tested 353 participants in total, over the course of one week.

The rubber hand illusion is perhaps the most well-known of all embodiment effects. To induce the illusion, a visible fake hand and the participant’s concealed real hand are stroked in synchrony, so that the felt touch of the brush on the real hand and the seen touch on the fake hand are closely matched. The level of agreement or disagreement with statements describing illusion experience is taken on a scale from -3 (indicating strong disagreement to +3 (indicating strong agreement). Expected effects in the rubber hand illusion may be easy to discern from the induction procedure alone, even if given no verbal instructions; for example, it may be clear to participants that they are expected to feel the touch of the brushing on their own hand located on the fake hand positioned in front of them.

We tested 353 participants, measuring both their SWASH hypnotisability score and their performance in the rubber hand illusion (Figure 1). Consistent with our predictions, hypnotisability scores predicted subjective report scores and also proprioceptive drift (a measure of changes in the felt position of the participant’s hand). Figure 2 shows that, on average, experience of both felt touch and ownership in the rubber hand illusion requires the ability to control phenomenology to meet expectancies. The 353 participants have been divided here into four groups by their hypnotisability score (error bars show 95% CIs). The figure shows individual illusion agreement scores for standard illusion statements (used in Botvinick & Cohen,1998 and for many subsequent studies). Statement S1 (“It seemed as if I were feeling the touch of the paintbrush in the location where I saw the rubber hand touched”) and S2 (“It seemed as though the touch I felt was caused by the paintbrush touching the rubber hand”) describe experiences of felt touch, while statement S3 (I felt as if the rubber hand were my hand”) an experience of ownership.  The least hypnotisable quarter of participants did not on average agree with statements S2 and S3, but this group did agree with statement S1. This is probably attributable to ambiguous phrasing, as the statement can be interpreted as asking for participants’ mundane experience of touch on their own hand (see Botvinick and Cohen, 1998, in which all participants reported maximum agreement with this statement). In any case, factor analysis suggests that agreement with this statement does not reflect experience of embodiment (Longo et al, 2007). 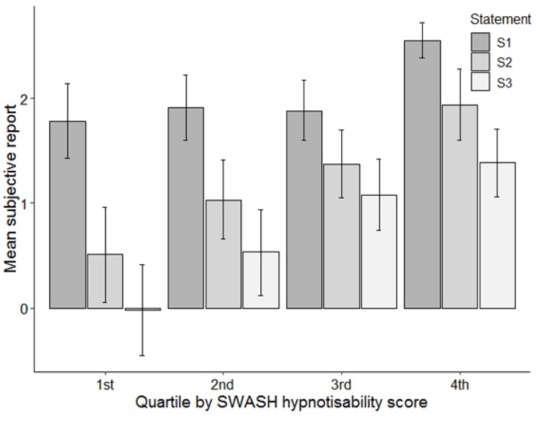 Figure 2. Mean subjective report scores in participants grouped by hypnotisability score (lowest scores on the left side of the chart).

In summary, common direct and indirect measures of the rubber hand illusion are substantially related to hypnotisability and on average the illusion does not occur in people unable to respond to hypnotic suggestion.

It’s worth noting that the rubber hand illusion has also been associated with common physiological measures like skin conductance response (SCR), histamine reactivity and body temperature. One might think these measures would be immune to phenomenological control.  However, these physiological properties are known to be susceptible to imaginative suggestion (SCR; histamine reactivity; temperature). We therefore predict similar relationships between hypnotisability and these measures.

Mirror touch and vicarious pain are experiences of pain or touch in response to the witnessed pain of another. In a research setting, these effects can be studied through the use of videos showing painful stimuli, or of touch to humans and inanimate objects. The primary measure is the proportion of videos which generate a felt touch or an experience of pain in response to visual stimuli. 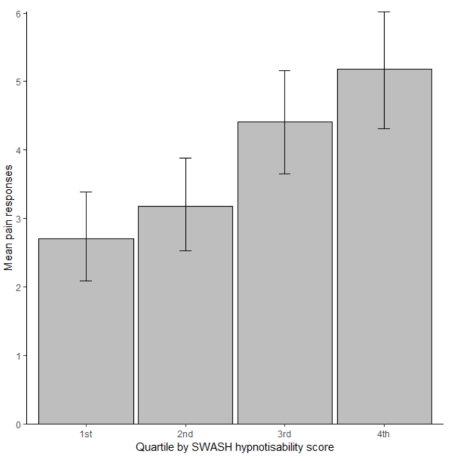 Figure 4 shows the results for mirror touch synaesthesia. Here, a sample of 154 participants were tested. Mirror touch synaesthetes (defined by response to 9 or more videos) were, on average, highly hypnotisable, with a mean score equal to the cut-off for the top 13% of SWASH scores. 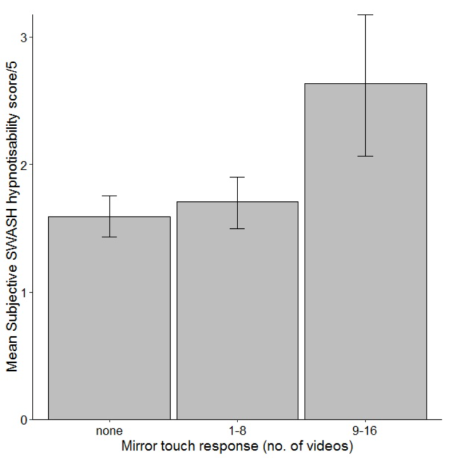 Figure 4. Mean hypnotisability scores in participants grouped by the number of reports of mirror touch experience to video stimuli (no response, 1-8 videos and 9-16 videos).

Measures of three prominent embodiment effects – the rubber hand illusion, mirror touch synaesthesia, and vicarious pain – reflect the ability to generate compelling phenomenology in response to imaginative suggestion. At this stage, we do not know to what extent these effects are attributable to phenomenological control. Further work will be necessary to establish whether or not there are, for example, rubber hand illusion effects which do not require phenomenological control abilities. Note also that, if mirror experiences in everyday life are driven by phenomenological control, experimenter-derived expectancies may have a relatively minimal effect on measures of these experiences in the lab (because participants may respond this way to any similar visual stimulus, away from the scientific context).

Note that, because imaginative suggestion can produce changes in brain activity consistent with the suggestion given (e.g., activity in visual brain areas for suggested visual hallucination), phenomenological control may also account for the results of neuroimaging studies of these embodiment effects.

Our results demonstrate that the engagement of phenomenological control abilities to fulfil expectancies can occur within a scientific context and that such abilities may account for these a range of subjective embodiment effects. Response to imaginative suggestion does not require a hypnotic induction, or even any hypnotic context. All that is required is the ability to control phenomenology and a context in which phenomenological control can be (unconsciously) interpreted as appropriate. Despite this, the majority of research into imaginative suggestion has been conducted within a hypnotic context, and as a result the possibility that scientific experiments present another such context in which phenomenological control abilities are engaged has been overlooked.

We are now developing a phenomenological control scale with which to investigate phenomenological control in many other effects across psychological science which could be influenced by the participant’s subjective experience. The results we present in this paper, therefore, may indicate that the reappraisal of empirical results in behavioural science will be necessary for a broad range of fields.

These studies focus on the role of phenomenological control in existing effects. However, phenomenological control should not be seen merely as confounding existing theories and presenting problems for psychological science. Trait differences in the ability to influence perception by top-down influences are a valuable target for scientific investigations of conscious experience in their own right.

This research was supported by the Dr Mortimer and Theresa Sackler Foundation, and the Canadian Institute for Advanced Research (CIFAR) Azrieli Programme on Brain, Mind, and Consciousness.

*Corresponding author, and author of this guest blog.