Behind this outlandish and rather ridiculous claim lies some fascinating science. The story starts with the discovery that injecting female virgin rats with OXT triggers maternal instincts, and that these same instincts in mother rats are suppressed when OXT is blocked.  Then came the finding of different levels of OXT receptors in two closely related species of vole. The male prairie vole, having high levels, is monogamous and helps look after its little vole-lets.  Male meadow voles, with many fewer receptors, are aggressive loners who move from one female to the next without regard for their offspring. What’s more, genetically manipulating meadow voles to express OXT receptors turns them into monogamous prairie-vole-a-likes. These early rodent studies showed that OXT plays an important and previously unsuspected role in social behaviour.

Studies of oxytocin and social cognition really took off about ten years ago when Paul Zak, Ernst Fehr, and colleagues began manipulating OXT levels in human volunteers while they played a variety of economic and ‘moral’ games in the laboratory.  These studies showed that OXT, usually administered by a few intranasal puffs, could make people more trusting, generous, cooperative, and empathetic.

For example, in the so-called ‘ultimatum game’ one player (the proposer) is given £10 and offers a proportion of it to a second player (the responder) who has to decide whether or not to accept. If the responder accepts, both players get their share; if not, neither gets anything.  Since these are one-off encounters, rational analysis says that the responder should accept any non zero proposal, since something is better than nothing.  In practice what happens is that offers below about £3 are often rejected, presumably because the desire to punish ‘unfair’ offers outweighs the allure of a small reward. Strikingly, a few whiffs of OXT makes donor players more generous, by almost 50% in some cases. And the same thing happens in other similar situations, like the ‘trust game’: OXT seems to make people more cooperative and pro-social.

Even more exciting are recent findings that OXT can help reduce negative experiences and promote social interactions in conditions like autism and schizophrenia.  In part this could be due to OXTs general ability to reduce anxiety, but there’s likely more to the story than this.  It could also be that OXT enhances the ability to ‘read’ emotional expressions, perhaps by increasing their salience.  Although clinical trials have so far been inconclusive there is at least some hope for new OXT-based pharmacological treatments (though not cures) for these sometimes devastating conditions.

These discoveries are eye-opening and apparently very hopeful. What’s not to like? 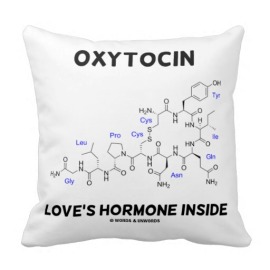 The main thing not to like is the idea that there could be such a simple relationship between socially-conditioned phenomena like trust and morality, and the machinations of single molecule.  The evolutionary biologist Leslie Orgel said it well with his ‘third rule’: “Biology is more complicated than you imagine, even when you take Orgel’s third rule into account”.  Sure enough, the emerging scientific story says things are far from simple.

Carsten de Dreu of the University of Amsterdam has published a series of important studies showing that whether oxytocin has a prosocial effect, or an antisocial effect, seems to depend critically on who the interactions are between. In one study, OXT was found to increase generosity within a participant’s ingroup (i.e., among participants judged as similar) but to actually decrease it for interactions with outgroup members.  Another study produced even more dramatic results: here, OXT infusion led volunteers to adopt more derogatory attitudes to outgroup members, even when ingroup and outgroup compositions were determined arbitrarily. OXT can even increase social conformity, as shown in a recent study in which volunteers were divided into two groups and had to judge the attractiveness of arbitrary shapes.

All this should make us look very suspiciously on claims that OXT is any kind of ‘moral molecule’ as some might suggest.  So where do we go from here? A crucial next step is to try to understand how the complex interplay between OXT and behaviour is mediated by the brain. Work in this area has already begun: the research on autism, for example, has shown that OXT infusion leads to autistic brains better differentiating between emotional and non-emotional stimuli.  This work complements emerging social neuroscience studies showing how social stereotypes can affect even very basic perceptual processes. In one example, current studies in our lab are indicating that outgroup faces (e.g., Moroccans for Caucasian Dutch subjects) are literally harder to see than ingroup faces.

Neuroscience has come in for a lot of recent criticism for reductionist ‘explanations’ in which complex cognitive phenomena are identified with activity in this-or-that brain region.  Following this pattern, talk of ‘moral molecules’ is, like crime in multi-storey car-parks, wrong on so many levels. There are no moral molecules, only moral people (and maybe moral societies).  But let’s not allow this kind of over-reaching to blind us to the progress being made when sufficient attention is paid to the complex hierarchical interactions linking molecules to minds.  Neuroscience is wonderfully exciting and has enormous potential for human betterment.  It’s just not the whole story.

This piece is based on a talk given at Brighton’s Catalyst Club as part of the 2014 Brighton Science Festival.